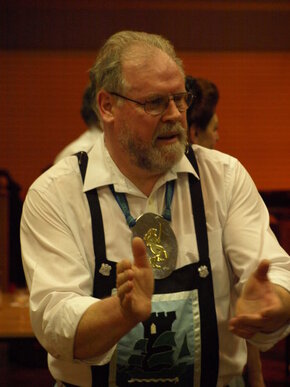 Julian: The Fool. No question!
Most sides have a 'Fool' and we are no exception. Julian is a law unto himself.
His kit comprises of the usual white shirt and blue breeches but instead of white socks he wears one of blue and one of green. (It is believed he has another pair just like it somewhere at home!) Instead of a tabard he wears a home-made waistcoat depicting Thomas The Tank Engine! On top of this he wears a tail-coat bedecked with various badges and which, he says, is no fun dancing in on hot summer days. On his head he wears a top hat which is adorned with several feathers from pheasant and peacock among others. Oh!... And watch out for the rat !
Powered by