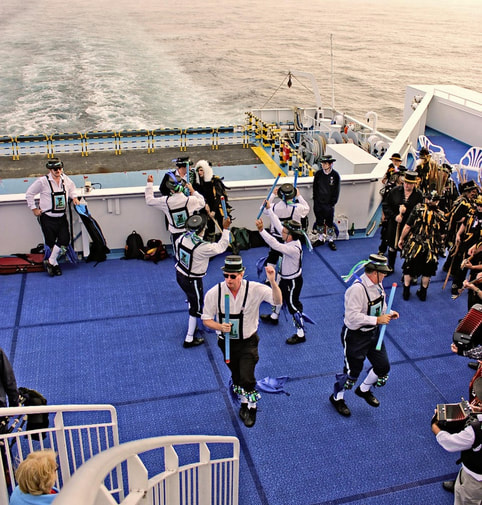 Plymouth Morris were among the 160 people invited to Brest to help celebrate the 50th anniversary on the Plymouth - Brest twinning link.
We represented the cultural part of the exchange along with the Plymouth Maids clog dancers, Wreckers Border Morris from South East Cornwall, the City of Plymouth Pipe band, the Devonport Park Community Choir and graduate theatre students from Plymouth University and the Barbican theatre.

We had already declared and handed over our cutlasses prior to boarding the ferry but the unfortunate Pipe band apparently had a bit of trouble over their Sgian Dubh with security.

Furthermore an impromptu music session was broken up by crew much to the chagrin of some (non-Morris) passengers, ‘too much noise on a night ferry’ apparently.
This was to improve greatly on the return.

On our arrival at Brest we were met by a large number of Bretois, including many of the musicians and dancers we had hosted in the Brest visit in May 2013.  In what was to become a recurring theme, we were plied with food and drink at the reception point before being driven to our first dance spot with was in the huge Carrefour-led Centre
Commercial in Brest. We shared spots for the rest of the day with the Maids and a couple of pipers from the band.

It was hot both in the centre and later outside. We danced to a large and appreciative audience in the centre. Almost as appreciative was the owner of the bar adjacent to our first dance spot although Carrefour also provided us with a large case of water and also an excellent buffet lunch in their staff restaurant.

Most of us ventured on the new tram system for a trip to our next spot, in a park before the assembled and initially, puzzled, pupils of 3 local primary schools. A couple of audience participation mass dances soon got them excited and enjoying the event. One of their teachers later reported that the children had thoroughly enjoyed the event
as had the staff, much to their own surprise.

We then headed for the more challenging assignment of the local secondary school, the Lycee Iroise, where the assembled group of teenage English students seemed likely to be a more difficult crowd?  Not really, an early selection of teenage victims to dance ‘Not for Joe’ with us followed soon after by a mass ‘Shepherd’s Hey’ got a most enthusiastic reaction and lots of photo calls before we left.

We then had the formal part of the evening, a welcome from the Mayor followed by a theatre performance from the above mentioned graduate students. Reactions among the side to this ranged from enthusiastic appreciation to complete bafflement - that’s culture for you!

It had been very hot, a heavy dance programme so perhaps we could all head for bed?  No chance!  Most of us ended up at an enormous garage party somewhere in the Brest suburbs where we were entertained by the pipers and bombard players of Kevrenn St Mark, local melodeon band Dizoursi and our own musicians as well as getting to try some Breton line dancing. This lasted until well after midnight - hope the neighbours had a sense of humour.

Early start the next day (ok some of us slept in!) when we were participating in celebrations to mark the annual Foire St Michel. This is Brest’s annual event which, uniquely in France, offers children the opportunity to sell their unwanted toys in a market setting. There are load of other stalls as well of course.

On this day we teamed up with the Maids again, all of the Pipe band and the Wreckers as well.

We did a bit of dancing then took part in a parade through the main avenue of market stalls before going back up to a lounging area where we were due to be fed (again!) And then we were left to our own (dancing) devices until 3.30 pm. By happy coincidence the food  tent was opposite a tent selling hand-pulled beer from a local brewery (Coreff in Carhaix, highly recommended), so in the finest tradition of the Morris we set out to do our bit to assist economic recovery in the French brewing industry.

After a fine lunch and more dance spots around the market, we had a further procession into the centre of Brest where we had a dance spot in a pedestrian square high above the river and opposite the Castle. Once again we gathered an appreciative audience and an appreciative local bar owner!

We then had some free time, which some time to explore the culture and shops of Brest but others, sad to report, headed for the back room of another local (Irish) pub for another music and singing session. The Irish landlord was sufficiently enthused to offer the last remnants of the company free beer (Coreff again!) so long as he could join in on spoons. We felt obliged to accept his offer.

We then headed for a huge ceilidh at a local trade union building which had been put on by the twinning committee which, unsurprisingly, featured more singing and dancing. Bed was late again...

The following morning saw a leisurely breakfast and, finally, a bit of Brest sightseeing conducted by our various hosts before a farewell reception at a local biscuit factory,
honestly, then a trip back to the ferry port at Roscoff.

The ship back had a far more Morris friendly captain, so featured all three sides dancing on the rear deck of the ferry ‘Armorique’ to an appreciative if sometimes bemused audience of both travellers and crew. Wreckers had used their time with the Pipe band to work out a suitable dance to be accompanied by pipes and drums which was quite spectacular whilst we added one of the ship’s female officers to our long line of extremely attractive ‘Roses’ with a spirited ‘Rose Tree’ (Bampton).

As night drew in, we went back inside where the Devonport Community Choir gave a half hour concert in one of the lounges. This turned into a three hour song and music session which lasted us back to Plymouth.  It was generally agreed that the six hour voyage had never passed more quickly.

So that is the saga of our weekend in Brest. Our thanks are due to the Plymouth - Brest twinning committee for the invitation, specifically to our individual hosts who took us
into their home and looked after us so well, to Brittany Ferries for their good humour and to the people of Brest who welcomed us, applauded us, joined in with us and overall gave us a weekend to remember.