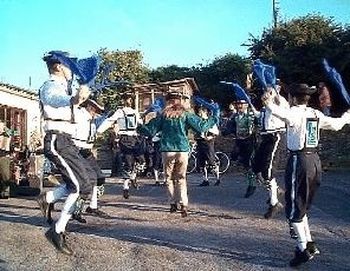 The long naval history that Plymouth has provides the main theme of of our costume, or 'kit'.

As is usual for Morris Teams throughout the country, we wear white long-sleeve shirts and this represents purity. We wear navy blue knee-length breeches with a pale blue stripe running down the outside seam of each leg. White knee-length socks and black shoes are also worn.

Whereas most Morris sides wear 'baldricks' across their shoulders, and which diagonally cross their chest and back, we have a square tabard depicting, front and back, a galleon in full sail. This is in green on a pale blue background and laid over a black tower, depicting one of the Palmerston defences which are part of the Plymouth coat of arms. It is also depicted as sailing on a sea-green ocean. Mrs Lily Johns, mother of one of the founder members, Lewis Johns, designed and made the original tabards.

There is some debate as to whether the galleon is 'The Mayflower' in which the Pilgrim Fathers sailed from Plymouth in 1620, or whether it is 'The Golden Hind', (formally 'The Pelican'), Sir Francis Drake's ship which he renamed as he circumnavigated the globe in her between 1577 and 1580.

On the front of the tabard, in the top corners, we wear small silver badges depicting the Plymouth coat of arms. These were part of the uniform of Plymouth bus drivers and were donated to us when Plymouth City Transport ceased to exist and Citybus took over. We present these badges to new recruits when they have become proficient in a few dances.

We use large, dark blue handkerchieves, or 'wavers' as they are known, which, again, is different from the usual white you will see elsewhere in the country. Traditionally wavers were used to ward off evil spirits in medieval times when Morris dancing originated. Our hats are replicas of those worn by Petty Officers in the Royal Navy up until the early 1900s, suitably adorned with coloured ribbons. Our Squire, or leader, wears a Bicorn which is an antique as worn by young midshipmen or Lieutentants in the Royal Navy of Yesteryear.

We wear leather bell pads strapped to our knees and covered with ribbons. Again these are in pale blue, dark blue and green which reflect the colours of the sea. These were originally for helping to ward off those evil spirits. These days they either ward off those members of the public who do not want to experience our particular piece of English Heritage, or they attract a crowd of spectators who so thoroughly enjoy the performance that they are happy to put some money in the hat that is usually passed around at our dance spots and in so doing contribute to the good fortune of the Morris - which is to guarantee fine weather wherever we dance.

We also donate a large portion of what we collect to various charities every year.